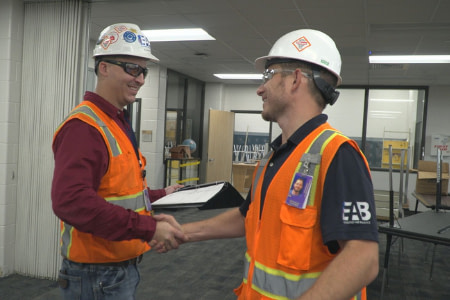 We are what we repeatedly do. Excellence, then, is not an act, but a habit.

When providing Building Commissioning (Cx) and Total System Balance (TAB) services we are often required by the project specifications to attend Factory Witness Testing (FWT) for major pieces of equipment. These trips are an opportunity to ensure that the equipment, which will eventually be shipped and installed onsite, is built per the project specifications and will operate as intended.

Why Factory Witness Testing is Important

Recently, we were engaged to attend the Factory Witness Testing for the paralleling switchgear and the generator when an owner was updating their Emergency Power Systems (EPS). Prior to attending Factory Witness Testing, it is essential to be aware of the Project Specifications and the Submittal for the equipment being tested. This will assist you in finding issues that may be present with the equipment.

When attending the Factory Testing for the generator, the Engineered Air Balance Team inspected all aspects of the generator, including the enclosure and the panelboard installed inside the enclosure. Items that were noted while inspecting the system were recorded and are to be verified as corrected and completed in the field on the installed system. A couple of examples of noted items include:

At the Factory Test for the paralleling switchgear, EAB was again able to inspect the entire gear. One major issue discovered was that the gear was built for bottom feed, meaning that the cables entering and exiting the gear do so through the bottom of the gear. The project was designed for the gear to be top fed. By discovering this at the factory and prior to field installation, the project delays were limited.

In another example, the EAB Test and Balance Team was required to witness the Factory Testing for air handling units (AHU) to be installed in a hospital near the coast. The Factory Witness Testing for the AHUs included deflection testing, leakage testing, and inspections of the units. During the inspection of the units, it was observed that the AHUs were constructed of galvanized steel before the cooling coil section; however, the project specifications detailed the sections to be constructed of 316L Stainless Steel due to the coastal location. Again, delays were minimized due to the early problem detection.

Another benefit to FWT is the ability to witness the operations of the systems prior to installation on projects. For the generator and paralleling switchgear detailed above, we witnessed all the alarms being simulated that are required per the Project Specifications, albeit separately, as the equipment was built at separate factories. While verifying the alarms on the paralleling switchgear, it was observed that the generator Low and High Battery Voltage Alarms annunciated the same alarm at the Master Controller and not separate alarms as detailed in the Project Specifications.