“Every success story is a tale of constant adaption, revision and change.”
– Richard Branson

As projects become more and more “budget-conscious”, expensive HVAC equipment/components are becoming the target to start “balancing” the project budget; which is typically counterproductive to services of the actual “balancer”.

Our team was involved in a renovation of an existing vivarium facility, including all-new everything: except for the two original AHU’s. It was determined that the units would be sufficient, and the budget only allowed for fan array upgrades with VFD’s and new controls. Through the renovation of the project, and into the testing, adjusting, and balancing, the systems functioned well, until Dallas, TX experienced weather below 30oF regularly for weeks.

The existing AHU’s were 100% outside air and configured in a typical double-duct layout with a pre-filter, bank of four (4) steam pre-heat coils, chilled water coil, etc. The first time the low temperature safeties tripped one of the AHU’s, we discovered that the new temperature sensor to control the steam pre-heat valves was a single 12” sensor, installed within 3” of the steam inlet to the coil, on a system with a total coil of approximately 100 ft2.

Once the sensor was replaced with an appropriate averaging sensor, the PID loop was tuned for better control, however, we still had issues with the low temperature safeties in cold weather. Once we determined it was always one of the four safeties that caused the trip, we performed a temperature and face velocity traverse to check for stratification. Diagram 1 shows the temperatures that were recorded on the leaving side of each of the four coils with all the steam valves 100% open.  Each of the four coils had a separate low temperature safety that serpentined across the leaving side of each coil.  The safety that continued to trip in cold weather was associated with the coil that has a leaving air temperature of nearly outside air temperature at full flow. Once the cold section of coil was identified, it was only approximately 10”x 18” section out of 100 ft2 causing the unit to shut down in cold weather, as the safety only requires a 12” section of the element to fall below set point to trip. A section of sheetmetal was used to blank-off the offending section of coil, while a replacement coil could be procured.

The AHU never had an issue previously, so this must be a construction-related issue, and construction-related cost, right?  Not entirely. The previous control system only utilized one, 25’ low temperature safety for the same coil bank.  The cold section of coil was still there, however, the safety did not provide full coverage of the coil, and put the chilled water coil at risk of freezing.

Once the weather in Dallas warmed up to a balmy 50oF, we could move on to the next temperature issues that arose on the project.  We noticed a trend that several areas, very close to the mechanical room that the AHU’s reside, were not maintaining their room temperature set points. The double-duct terminal units that served the areas in question indicated that in full heating mode, the terminal units only supplied 60oF air to the space.  We investigated the AHU and recorded temperatures in each section of discharge ductwork on the hot deck, shown in Diagram 2, in an overhead view. 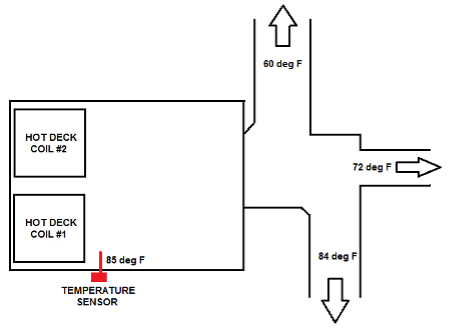 Clearly, as the spread of temperatures in each section of hot deck ductwork indicate, we had issues.  The first item we discovered was the existing hot deck steam coil #2 was manually valved-off, due to a previously control valve issue.  With the valves opened, we still had significate stratification.  We then discovered that the temperature sensor controlling two separate control valves was a single, 12” sensor, installed direction over the hot deck steam coil #1.  This caused control valves associated with coil #2 to stay nearly closed, as the layout of the system favored coil #1.  Ultimately, a second sensor for coil #2 was installed, and the control system modified to control each set of control valves to the associated sensor.

Again, some of the areas that had issues maintaining room temperature were minimally updated on the renovation, and never had issues before the project, so must be related to construction, right?  Again, not entirely.  Most of the area was full of sterilizers, cart washers, etc, that generated enough heat internally, and never needed additional heat from the terminal units.  It was during a steam shutdown of the sterilizers, cart washers, etc, that forced the terminal units into heat and unveiled the hot deck coil issues back at the AHU.

The original schedule for the project was to be complete with TAB activities long before the cold season, and we would provide the AHU preheat capacity test data in an opposite season test.  The week before the first-set of coil issues were discovered, research animals were scheduled to be moved-in.  The project was delayed to a number of non-HVAC issues, but the delays ultimately saved the project by allowing testing through the winter season without impacting animals and research.