HomeNewsYou Can Feel The Difference With Gar Conaway

You Can Feel The Difference With Gar Conaway 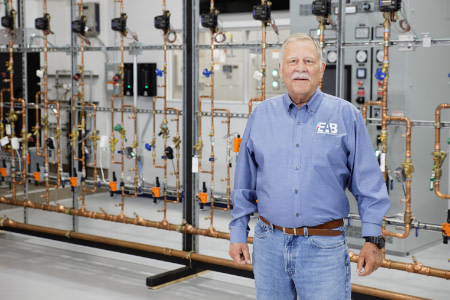 “Since the start of my career at EAB, I was shown the importance of providing quality work that would exceed our clients’ expectations. The way we do business encourages everyone on our team to work with passionate integrity. This has built strong, long-lasting relationships with our clients. As we continue to deliver optimum operating facilities, it’s been a privilege to see how the trust and loyalty of our clients has grown exponentially.” – Gar Conaway

Gar has played a pivotal role at EAB the last 46 years. His time at EAB started in 1975 when he was interviewed by Walt Lipski and Jim Reid. Gar was hired on the spot and began his career with EAB as a Technician in Training.

Gar has had the unique experience of working for all 5 EAB Presidents. Gar’s career grew alongside EAB’s, and he became a crucial teammate in many milestone projects…more on that later!

In the early 1980s, Gar was promoted to Project Supervisor and ran jobs in Oklahoma, New Mexico, Texas and Arkansas. He traveled across the United States performing Testing and Balancing services for TGI Fridays and Dalts restaurants.

In 1998, Gar was promoted to Field Operations Manager. For the next 15 years he managed projects for school districts and universities expanding across Southeast Texas.

Moving into a Sales Manager role in 2013, Gar spent the next seven years working closely with facility managers for K-12 schools and universities throughout the Southeast Texas region to implement testing and balancing, giving educational facilities greater assurances for optimal life-cycle performance.

Gar’s hard work and dedication has not only left a lasting impression on EAB but has moved the industry forward as a whole. Gar maintains strong relationships with his clients and continues his responsibilities as a Pre-Construction Manager.

In his 46 years at EAB, Gar has been an influential teammate for many milestone moments at EAB. You’ll notice that the projects we mention, not only helped to build EAB into the Industry leader we are today, but also improved the TAB and Building Commissioning Industry as a whole.

In 1978, Gar received his B.S. in Architecture from The University of Texas at Arlington and his AABC Test and Balance Certification. After completing college, Gar traveled to Russellville, AR to complete the Arkansas Nuclear One, Russellville, AR 2nd reactor project with Walk Lipski.

As Senior Project Manager, Gar worked with the Bexar County Jail design team and contractors to develop new written procedures to meet Texas Jail Commission requirements in 1988. These procedures broke new ground in testing jail smoke-removal systems that are used to this day.

In 1989, Gar provided the bidding and contracts for COMPAQ’s corporate campus in Houston, which at this time was an American personal computer company. The buildings were complex, highly sophisticated and EAB provided services for many years.

When asked, “What is your absolute favorite thing about working for EAB?”, Gar responded:

“When I come to work, I know that the people in this company have done their best to give the owner the product they deserve.”