You Can Feel The Difference With Kit Brockles 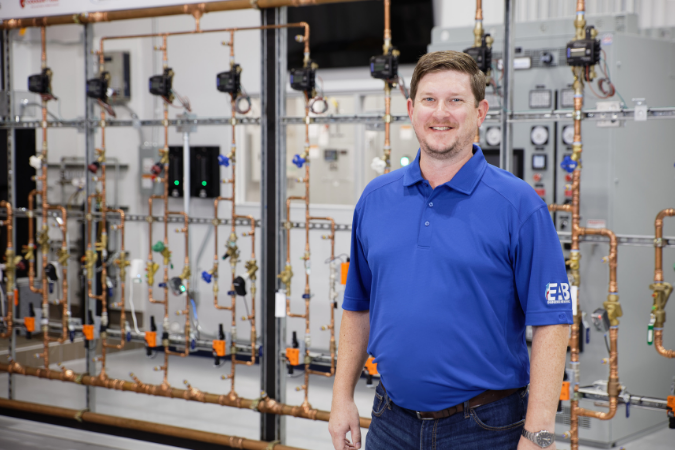 “My first go-round in college did not go so well! Somehow, through mutual friends, I ended up sitting across the desk from Earl Underwood in an interview to become “summer help”. Working at EAB for six years gave me the resolve to go back to school and finish my engineering degree. I do not believe I would have finished my degree had it not been for my experiences at EAB.” – Kit Brockles

Kit began his career at EAB working in the summer of 2001 as a part time Technician in Training. Over the next two years, hard work and dedication led Kit to the role of Field Technician.

During his early years at EAB, Kit grew in his technical knowledge and became involved in many EAB projects, including the Justin Wakeland High School project in Frisco, Texas. This was Kit’s first Testing and Balancing project to lead from start to finish.

By 2007, the work he had grown to love at EAB prompted him to complete his B.S. in Mechanical Engineering degree at Texas Tech University.

After the completion of his degree, Kit returned to work at EAB in 2009 as a Project Coordinator. Since then, Kit has been an invaluable member of the EAB team. In 2011, Kit was instrumental in helping to develop the EAB Commissioning Group separate from our TAB services. He continued to lead his fellow teammates with integrity and subsequently was promoted to Commissioning Manager of the Dallas office.

These milestone moments are just a glimpse at the impact of Kit’s time at EAB. While he has delivered countless optimum operating facilities, these projects stand out as some of the most notable.

In 2014, the University of Texas at Dallas School of Management II was the first major project Kit commissioned. It was also the first Leadership in Energy and Environmental Design (LEED) Silver project for which Kit performed commissioning services.

Kit led the project for The University of Texas at Dallas Engineering Building in Richardson, Texas in 2019. This American Institute of Architects (AIA) award winning project was featured in Texas Architect Magazine. It also achieved Leadership in Energy and Environmental Design (LEED) Gold status.

The University of North Texas Health Science Center Interdisciplinary Research Building in Fort Worth, Texas is the most sophisticated project that Kit has been a part of. This impressive project also took place in 2019 and achieved Leadership in Energy and Environmental Design (LEED) Gold recognition.

Quality. While growing up, my father used to always tell me when I did something incorrectly, “If it’s worth doing, it’s worth doing RIGHT”. While this might have driven my younger self crazy, it is the motto I live by today.

What do you like to do on your days off?

When I can manage to get away from having three children crawling all over me, you can find me at the deer lease or in my shop working on things for the deer lease.