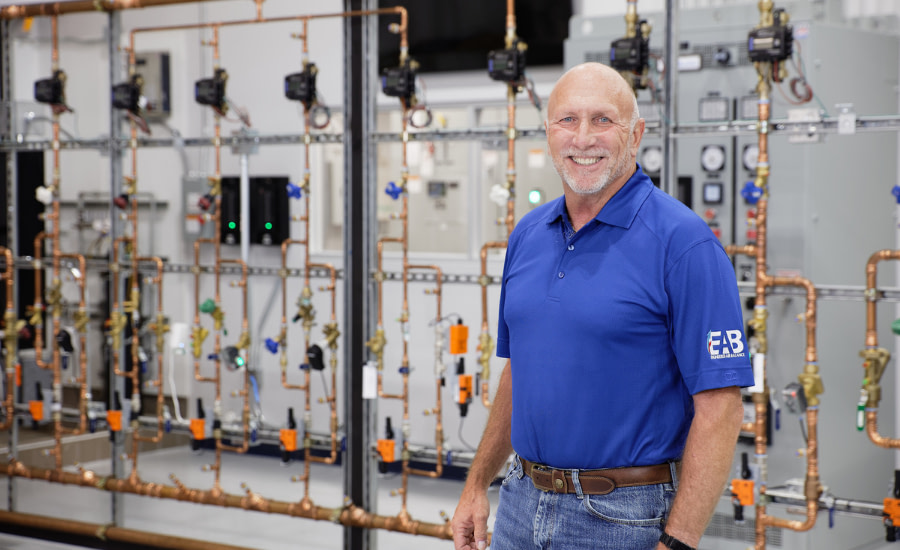 Terry is set to retire this coming Tuesday, August 31st. Terry has been an integral part of the Engineered Air Balance team for the past 36 years. We are thankful for his friendship, his leadership, and his commitment to serving others. Thank you. You’ve done so much for all of us, and your contributions will not be forgotten.

When asked about his time at EAB, Terry commented,

“I am passionate about working together to serve others. When we come together as a team, we are able to achieve our goal of delivering an optimum operating facility, while building trusting relationships. “

Now your only job is to have fun, Terry, get good at it!

What Terry Means To Us

A Note From Becky

“Terry is the most disciplined person I know, both in professional and personal life.  He’s a man of his word, full of integrity and respected by all. And pot-lucks around the office will never be the same ‘cuz the man can cook.” – Becky Taylor

A Note From Jimmy

“My first day to work at EAB was with Terry Wright. Over the past 18 years, 15 of those have been working directly for Terry.  He is my mentor and my friend. He has coached me through the lowest of lows and praised me through the highest of highs.  One of my favorite saying of his is “You learn the most from the really challenging projects”, and it’s the truth. Thank you for everything you have taught me. It has truly been an honor. As your work chapter closes, I wish you and Jill fair winds in all of your journeys; you can finally turn your phone off.” – Jimmy Pelezo

A Note From Justin

“From the time I started at EAB almost twenty years ago, Terry has been a respected leader and technical resource to the entire team.  He is one of the most professional and respectful people I have had the pleasure of knowing in my career and he has impacted many people both within our team here at EAB as well as those outside our company.  In his role as Field Operations Manager in Houston, he brought our management team to a new level of organization and cohesive leadership to efficiently serve our clients according to our Mission and Vision.  Moreover, Terry has worked tirelessly on projects throughout his career to troubleshoot complex problems and bring all parties on the project together to get the best resolution for our clients.  He has been a tremendous asset to the EAB team and we wish him the best in the next chapter of his life.” – Justin Garner

A Note From David

“When I began my career at EAB I knew I was joining a company that had a long history in the industry and a seasoned team of individuals I would work alongside with. It was a wonderful experience to get to know much of the leading team by their reputation and stories prior to working with them directly, Terry was one of those leaders that was exceptionally impactful to me. Hearing stories about the relationships he built with Clients and General Contractors or how he managed large projects at Methodist and HP always stood out to me. There would be many occasions I would need to reach out to Owners or General Contractors and after we got done discussing the items I was reaching out about, the question would come, “How’s Terry? I worked with him on…” and I would sit there and listen to another one of the project stories I got used to hearing over the years. As my career progressed I had the pleasure of working with Terry directly and got to see firsthand the professionalism and dedication his reputation was built on. It was a privilege to gain the knowledge of working alongside him….I’m sure many others would say the same. I look forward to hearing about some fun fishing expeditions, Mexican Beaches, and great cooking stories post retirement! – David Rodriguez

A Walk Down Memory Lane…

How did Terry get started at EAB? What have the past 36 years looked like? What major projects has he accomplished? You can learn all of that and more here!

“When I started at EAB, I was a heavy smoker. Jim Reed, president of the company at the time, was on my project and noted that I was a smoker. He told me he was worried about my smoking. I asked him “why, because they would need to find my replacement if I became sick?” He said no, “because I worry about your wife and children, they need you to be healthy”. I was floored, he was more worried about my family rather than my contribution to the company. Jim challenged me to quit smoking. I accepted the challenge and have been smoke-free for 32 years and in excellent health at 65 years old.”
– Terry Wright