HomeNewsYou Can Feel The Difference With Jeremy White

You Can Feel The Difference With Jeremy White 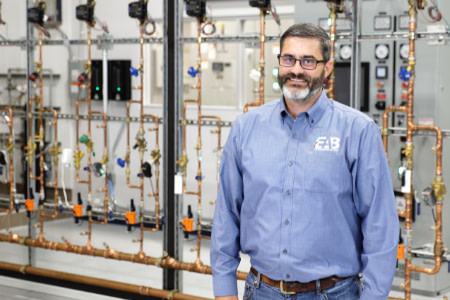 “EAB has provided me with many opportunities to grow professionally. Being surrounded by like-minded individuals has allowed us all to develop together at faster rates. The leadership at EAB encourages teamwork and togetherness which enables our team to provide quality work on a consistent basis for our clients.” – Jeremy White

Jeremy started his career with EAB as a Technician in Training after receiving his B.S. in Mechanical Engineering from Texas Tech University in 2009.

After a year of hands-on training, Jeremy earned a promotion to TAB Technician. During this time, Jeremy worked in healthcare at Presbyterian Hospital of Dallas on the new Acute Care Tower, which was later renamed the Hamon Tower.

Proving to be a valuable asset to EAB, he was promoted to TAB Project Supervisor in 2011. He supervised projects at Parkland Regional Hospital in Fort Wayne, IN and the new patient tower at Baylor Scott & White Grapevine.

Since 2011, Jeremy oversaw many important TAB and Commissioning projects. When he transitioned into a Commissioning Coordinator role in 2016, his efforts since then not only grew his professional career, but grew EAB in the commissioning industry as well.

Jeremy’s commitment and dedication to excellence over the past 12 years has not gone unnoticed. These milestone moments are just a glimpse at the impact of Jeremy’s time at EAB.

Jeremy served as a TAB Project Coordinator from 2014 – 2016. During this time, Jeremy coordinated the new construction projects at Methodist Medical Center of Richardson and Baylor Scott & White Waxahachie.

Jeremy also served as the Commissioning Coordinator on the new Radiation Oncology Building – part of the Harold C. Simmons Comprehensive Cancer Center at the University of Texas (UT) Southwestern Medical Center. This unique three-story building is structured in a way that enhances the delivery of quality care and made for a complex commissioning project.

Jeremy was promoted to Commissioning Project Manager in 2020 while leading the team assigned to the UT Dallas Science Building. The 186,000-square-foot Sciences Building was awarded LEED Gold status by the U.S. Green Building Council, a major achievement.

When asked, “What did you want to be when you were little?”, Jeremy responded: