You Can Feel The Difference with Terry Wright

The first day I started at EAB, I was told that I did not need a college degree to be promoted within the company. 36 years later it still remains true, if you work hard, learn from your mistakes and challenge yourself to improve every day, nothing holds you back at EAB but yourself.

Terry has been an integral part of the Engineered Air Balance team for the past 36 years. He began as a Field Technician in 1985. Within a year of beginning at EAB, Terry was promoted to Supervisor and put in charge of a large hospital project.

After completion of the hospital project, Terry was tasked with leading the team in the balancing of a large manufacturing facility. This job spanned many years, multiple client owners, and several promotions for Terry. While he started the project as a Supervisor, he completed it as the Project Manager. As a Senior Project Manager, Terry carried a heavy load. Not only did he oversee a team of project managers, he also actively managed several medical projects across the country. Due to his hard work and perseverance, Terry earned many promotions over the years and currently serves as the Houston Branch Field Operations Manager. He has contributed and continues to contribute greatly to the overall success of EAB. 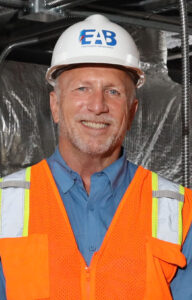 I love working for a company that is highly respected in the industry, because of the consistency and quality of the work we have done since 1956.

Over his 36 year career Terry has played important roles in numerous projects, but the following are a couple of his most memorable:

From 1987 to 1991, EAB was contracted to balance a manufacturing plant which continued to have issues after prior balancing attempts. What started out to be one project kept Terry and his team for 10+ years with the construction of a manufacturing plant consisting of 72 floors of office space and laboratories. Terry’s role changed several times over the course of this project and so did the facility owners. With Terry’s leadership, EAB was able to turn over an optimum operating facility.

During his time as Project Manager from 2008 to 2012, Terry had the opportunity to work for MD Anderson Hospital. Though having worked several projects at MD Anderson Hospital, this was a 21-story facility. Being Project Manager meant that he was on the project every day. He learned the necessity and rewards of organization, communication, and coordination with the project team. This project would ultimately prepare him for future responsibilities as a Senior Project Manager and the Field Operations Manager.

With a breadth and depth of experience, Terry specializes in the critical care environments of hospitals and research facilities.