You Can Feel The Difference With Bill Chalmers

“It’s a high honor to be a part of the EAB Team. When I received the call from EAB,  the most highly regarded TAB and Cx organization in the industry, with an offer to join the team, I didn’t have to think twice. In my role as Technical Training Manager, I am looking forward to the opportunity to fill a very important need in this industry by properly training the next generation of technicians, engineers, and building operators in the fundamentals and beyond.” – Bill Chalmers

Welcome To The Team, Bill!

Engineered Air Balance Co., Inc. proudly welcomes Bill Chalmers to the EAB Training team as a Technical Training Manager. Bill has a wealth of technical knowledge and 38 years of experience in the industry. We are honored to have him as a leading role in the development and expansion of EAB Training. Welcome, Bill. We are so grateful to have you on our team!

A Couple Notes From Our Team… 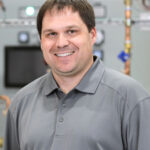 “Over the years, we have had the opportunity to work alongside Bill on numerous client projects. It quickly became obvious that he was the ‘real deal’. Bill has all the qualities that we like to say, help our clients ‘feel the difference’. His dedication, perseverance, technical knowledge, and passion for training truly makes him a perfect fit for our team. We are so thankful to have him!” – Justin Garner

“We are very excited to welcome Bill into the EAB Training family. Bill brings a set of skills and experience that helps us give our students a complete understanding of the MEP world. His design and training background will be hugely impactful to the development and growth of EAB Training. It’s an honor to work alongside an individual who has so greatly influenced the industry. Welcome to the team, Bill!” – Derek Glenn

Bill started his career in 1984 as a Sales Engineer for Trane’s Toronto franchise, Sweeney Sales Inc. Bill gained valuable technical knowledge and experience over this time as he assisted consulting engineers in building design including The Hospital for Sick Children and Pearson Airport Terminal 3.

In 1992, Bill was a founding principal of HTS Engineering. In this role, Bill was very successful in his engineering sales role, and made a significant impact on the organization by developing the controls department and creating the core operating structure. In addition to growing his passion for training, Bill influenced the design of many projects including Whitby Psychiatric Hospital, Pearson Airport Terminal 1, and Rama Casino.

Bill’s hard work did not go unnoticed. By 2000, Bill earned the role of President of HTS Texas. In this role, Bill produced effective salespeople within 12 months of hiring through a rigorous ASHRAE training curriculum, earning high sales dollars for the company.

In Bill’s next role as VP of Engineering for Page Southerland Page, Bill managed mechanical, electrical and plumbing design while recruiting, and training engineering employees. Bill reviewed and sealed mechanical, electrical, and plumbing drawings for over 50 projects and developed sustainable designs including energy recovery systems, evaporative cooling and economizers.

In 2012, Bill joined Johnson Controls Houston Branch as a Senior Account Manager. In this role, Bill was responsible for promoting Building Efficiency products to consulting engineers and end users. He also led teams that estimate and bid complex products offered by Johnson Controls Inc. Bill conducted many training sessions for Johnson Controls. His projects that were balanced and/or commissioned by EAB were at Ben Taub Hospital, Houston Methodist Hospital West Campus and Houston Methodist Hospital Baytown

Bill transitioned to the role of Account Executive for Honeywell Sustainability. In this role, he was able to help companies reduce their carbon footprint and achieve their ESG goals.

Over the course of Bill’s impressive 38 year career, he has had many notable projects. We’ve noted just a few of them below:

One of Bill’s most sophisticated projects was the University of Houston Sugar Land Brazos Hall. As the engineer of record on the project, Bill and his team were responsible for designing the mechanical, electrical, and plumbing systems.

The most distinctive building Bill has ever worked on was the University of Texas El Paso School of Nursing. The design of the College of Health Sciences and the School of Nursing recognizes the distinctive “Bhutanese” architectural style. Bill was the engineer of record, and his team designed the mechanical, electrical, and plumbing systems.

Another milestone project for Bill was the construction of the Texas Department of Safety Crime Labs in Hidalgo and Corpus Christi. These were very interesting projects because of their scope and the accommodations that were needed for the forensic labs. As the engineer of record on the project, Bill and his team were responsible for designing the mechanical, electrical, and plumbing systems.

Bill considers the Houston Methodist West Hospital project the “pinnacle” of his consulting engineering career. Bill was the engineer of record, and his team was responsible for designing mechanical, electrical, and plumbing systems. The mechanical team worked closely with EAB, who was the TAB Agent, to ensure the many mechanical systems worked properly.

What is your ideal room temperature, and why?

I installed a system that keeps my home at 77 degrees F and below 40% relative humidity. Everyone is comfortable and my energy bill was reduced by 50%.

What did you want to be when you were little?

Integrity, because it means doing the right thing no matter what. EAB is known throughout the construction industry for always doing what’s right. I conduct my affairs with integrity in hopes of receiving the same high regard others have for EAB.

What is your absolute favorite thing about working for EAB?

The people. It is a high honor to work with the best people in the industry… and my wife no longer needs to remind me that I should pursue my calling of being a training manager.