We had a recent opportunity to perform the testing and balancing in an ISO 7 cleanroom envelope that involved setting up a pressure cascade of 17 rooms with 550 fan filter units (FFU). This project provided various challenges that were solved through team communication and extensive testing. 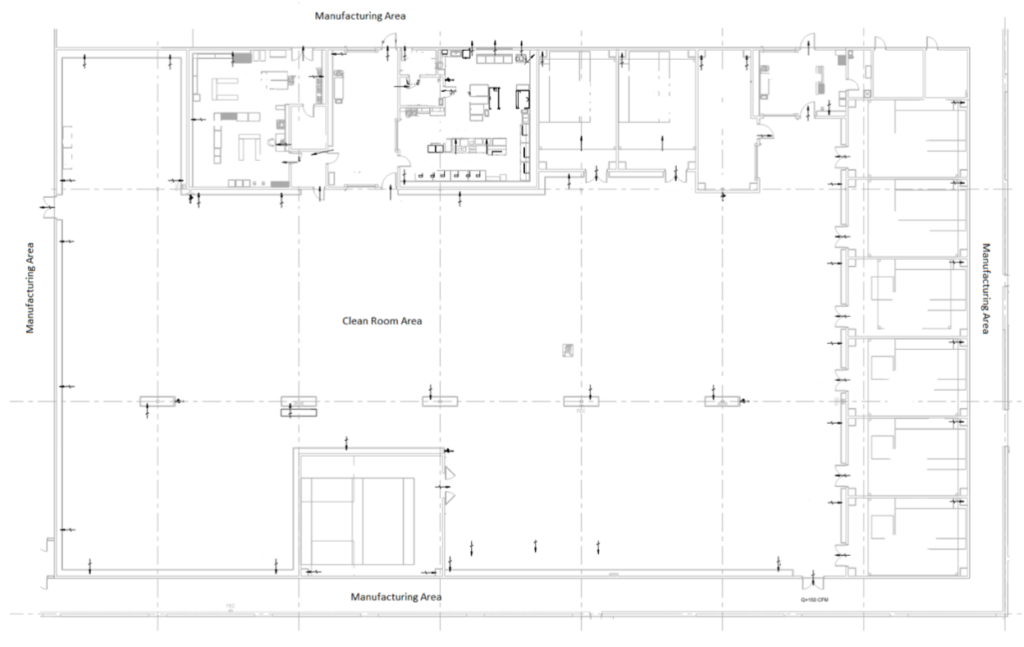 Adding another variable to the building pressure surrounding the cleanroom, the manufacturing area was served by two rooftop units (RTU) that relied on barometric relief dampers when the units entered an economizer mode. Since this method of building pressure control is not precise, we had concerns that maintaining the correct pressure relationship between the cleanroom envelope and the manufacturing area would be challenging.

Finally, the cleanroom spaces were designed to be served by three RTUs, each serving the large common room in the center of the envelope and the associated rooms adjacent to the center. The units would supply variable volume terminal boxes above the ceiling into a recirculation plenum driven by the FFUs. The return airflow was provided by low return grilles in the recirculation plenum walls. Because the units were designed to be variable volume and the three units served a common area, we had additional concerns about maintaining the proper pressure cascades within the cleanroom as supply boxes modulated open and closed.

As we began testing and balancing the systems, we spent a significant amount of time communicating and explaining our concerns with maintaining proper pressurization of the space with the Design Team, Construction Team and Commissioning Team. As a result of the meetings and conversations the following design changes were implemented: 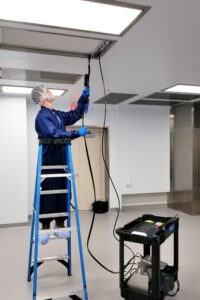 As a result, we explained the results to the design team and requested the minimum outside airflow ventilation rate for each of the units. We received the following information:

Adjusting the outside airflow from the “Design for Pressurization” column, down to the “For Ventilation” column still produced a cleanroom pressure that measured +0.10” WC. To solve this issue, the units would have to operate in a relief mode so that the space could still receive the minimum outside airflow required for ventilation and achieve the required room pressure of 0.05” WC. The final adjustment of the system resulted in a total outside air volume of 8000 CFM into the cleanroom envelope and with a measured 3300 CFM of relief air.

Testing cleanroom envelopes can be quite challenging because the operation of the facility depends on the equipment to function very precisely. Communication with the client and design teams are critical to the success of the project when additional challenges get presented.