HomeNewsTechnical ArticleKeep It Moving Down Range

Keep It Moving Down Range

A new Public Safety Training Center was constructed in a neighboring county.  The facility serves as the home for the Fire Science and Law Enforcement academies for the local community college. The center also provides expanded training for local fire departments and law enforcement agencies. We were contracted to provide test and balance services for the classroom and administrative areas of the building.  The testing and balancing for the shooting range, which connects to the building, was to be performed by another entity which specializes in shooting ranges.

After we completed our work and the facility opened, we were asked to return to help troubleshoot the indoor air quality concerns of the shooting range. When the Vice President/Provost of the college attended the initial meeting to discuss concerns and options, it was evident the situation was delicate. The greatest concern expressed was the gun powder odor that lingered for several hours after the ranges were used.  According to the Range Master, the air was stagnant and not moving down range.

The ranges are served by a constant volume unit with a supply fan array, a return fan array and a dust collector. The Range Specifications call for multi-lane ranges having laminar flow averaging 75 FPM over the entire cross sectional area of the firing line, with no reading less than 50 FPM and maintaining a negative pressure of 0.05” WC.

It was requested we take velocity reading at each distance in the range. We agreed to alternate lanes and take the requested readings.  Our initial readings were as follows:

Much to our surprise, the readings were within reason.  With further investigation into the operation of the air handling unit we discovered the return, outside air and relief dampers were all 100% open with the supply fans operating at 90% and the return fans operating at 82%.  A Pitot tube traverse of the supply and return revealed the outside air quantity being supplied into the range was 2860 CFM which calculates to 22% of the required 12,800 CFM. Ah ha!!!  Issue number one revealed.  So, the simple fix is to increase the outside air to design and that should fix the issue.  Well, how do you maintain a negative area (-0.05” WC) when you increase the amount of outside air, which is used to positively pressurize areas?

The first step in the process is understanding the outside air quantity needs to be increased about 10,000 CFM and maintain a NEGATIVE pressure to satisfy the design intent.  As many know, ranges have dust collectors installed at the end of the range to exhaust the lead and gun powder from the air.  So, with the induction of outside air it flushes out the lead/powder within the range, what we know as “air changes”.

With limited resources at our disposal within the control package of the air handling units, a control strategy for mixed air static pressure control was suggested.  The first step was to induce the required 12,800 CFM of outside air.  This was done by setting the supply fan to design airflow, opening the return damper 100%, the outside air damper 100% open, the relief/exhaust dampers closed and reducing the speed of the return fan.  A Pitot tube traverse of the supply airflow and return airflow revealed design outside quantity had been achieved.  We then verified the mixed air static pressure under this condition.  This measured static pressure in the mixed air plenum becomes your “setpoint”.

Next step, create a negative envelope of -0.05.  Easy, increase the return air fan speed…  more return equals less positive/more negative in the space.  Great, got it, all set!  Let’s just check the mixed air static pressure one more time….oops, that mixed air static pressure setpoint is much lower.  Well, that’s not gonna work.  What to do, what to do?  This is where the relief/exhaust dampers come in.

It is a very delicate balance between manipulating the return fan speed, the return damper position and the relief/exhaust damper position.  After multiple adjustments to dampers, checking mixed air plenum statics pressure and range envelope pressure the correct combination was finally obtained.  Our balanced conditions were as follows:

When looking at the numbers, it still looks odd with the supply airflow and return airflow being about 2100 CFM different, but with the outside air quantity of 12,855 CFM and the relief/exhaust dampers open there is a sense of understanding.  For our final range velocity measurements we adjusted our reading locations to include all lanes to have more coverage of the range.  Our final readings were as follows:

However, the greatest satisfaction was when we applied smoke to the range and observed the travel of the smoke down and out of the range. 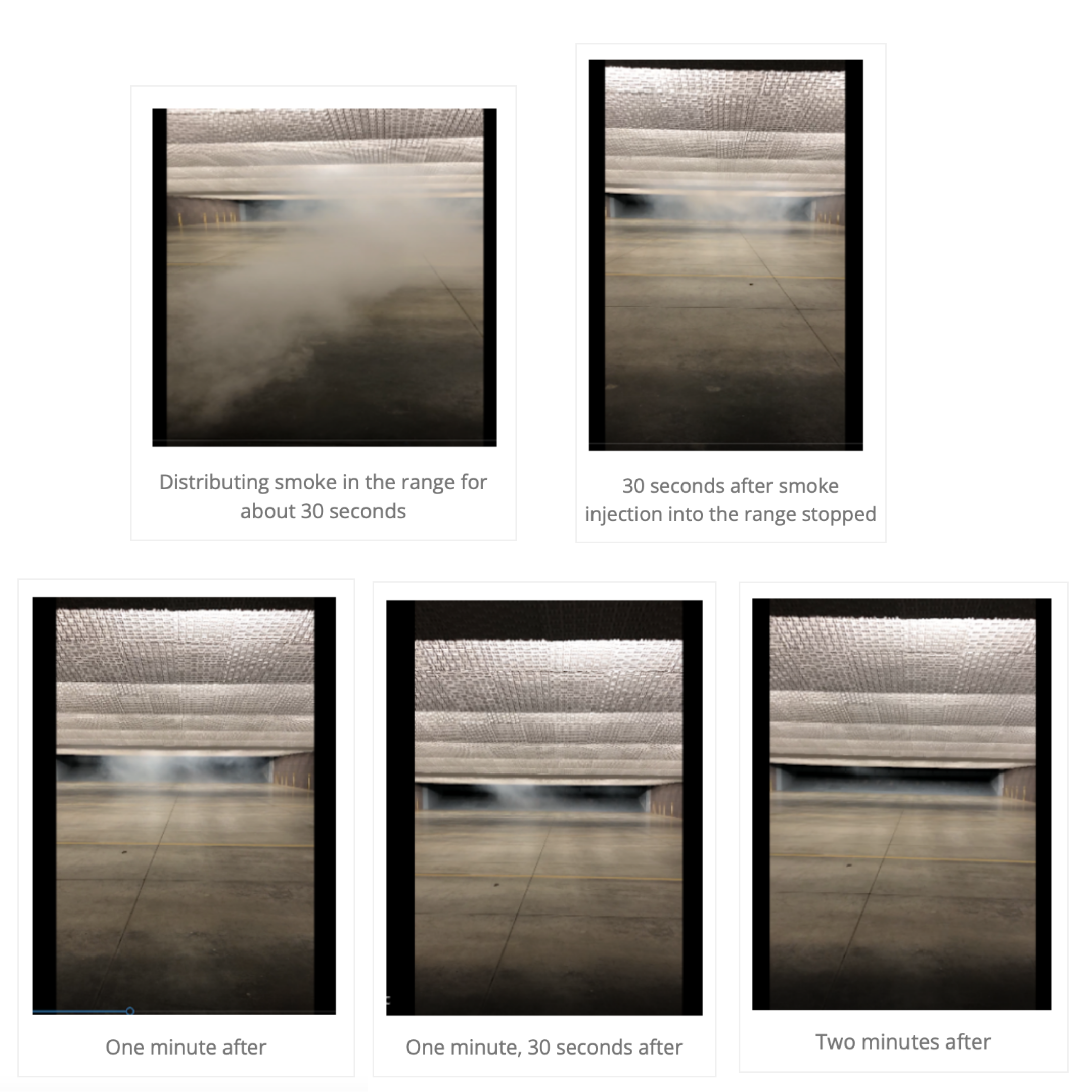 This demonstration was later done for the Owner representative, which they watched with admiration and satisfaction.

I would like to offer a special thanks to Eric Hamm and his team for the countless checks and rechecks of mixed air static pressures, damper positions, fan speeds and range pressures.  Job well done by all.